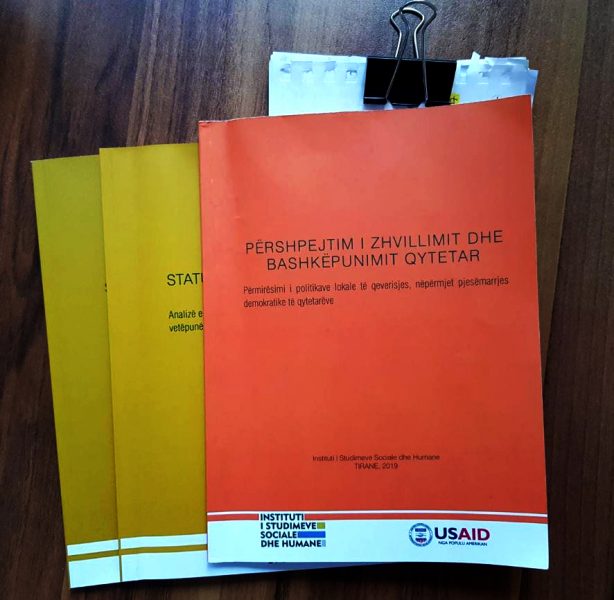 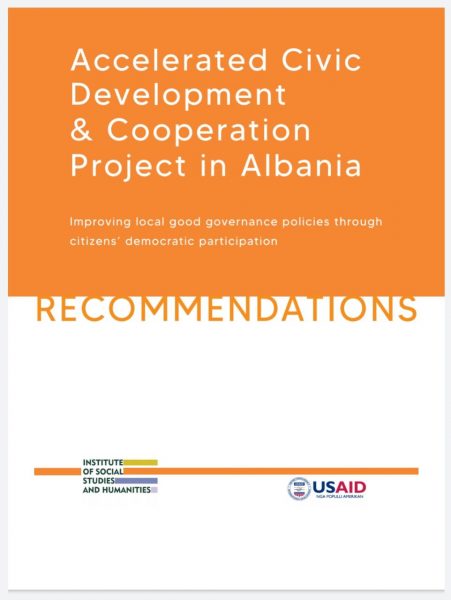 ‘‘This study, published in December 2019, aims to stimulate debate on: the needs, constraints and capacity to exercise an inclusive and participatory decision-making process for citizens and administration at the local level; appropriate models for local democracy practices, engaging citizens and raising awareness.’’

The study “Acceleration of Development and Civic Cooperation” conducted by the Institute of Social Studies with the support of USAID and in collaboration with many experts at national and local level, is among the only publications of its kind implemented in Albania. It analyzes development and comprehensive indicators of the territorial reform in the
municipalities of Tirana, Lezha, Saranda, Peshkopia, and Korca in order to provide a clear picture of how geographical, economic and demographic differences affect the conditions of local democracy and citizen participation.
The study, published in December 2019, aims to stimulate debate on: the needs, constraints and capacity to exercise an inclusive and participatory decision-making process for citizens and administration at the local level; appropriate models for local democracy practices, engaging citizens and raising awareness; generating cooperation processes with political factors at the local level, as well as transparency and accountability by local government units; assistance to state institutions in implementing the objectives of the territorial reform; impacting the public debates on territorial reform, decentralization and democratization in line with the objectives. The practice of local democracy in Albania before the territorial reform as the main obstacle there has been a deep fragmentation.
In the 373 local self-government units that existed before 2015, which was suffering from lack of capacity and human resources, as well
low level of decentralization of competencies to exercise democratic practices in the territory under administration. Local government will have more competencies according to the territorial reform with the work, which has in charge, which has more importance for the citizens in the new administrative units. But without a distorted process of interaction between the new local government units and the citizens, the local government will follow the inherited activity and ignore the needs and democratic right of the citizens to participate in the decision-making at the local level.
Compared to other countries in the region, Albania has a weaker practice of local democracy. This is mostly due to the procrastination of the decentralization process and the consequent lower distribution of funds and resources. In comparison, Northern Macedonia and Kosovo have much more experience and show better results in addressing the needs of citizens at the local level.
Therefore, this study aims to provide an analysis of conditions and dynamics at the local level, as basic knowledge about the creation of mechanisms and instruments for democratic participation in 61 new local self-government units in Albania.

FRIENDS OF THE ENVIRONMENT